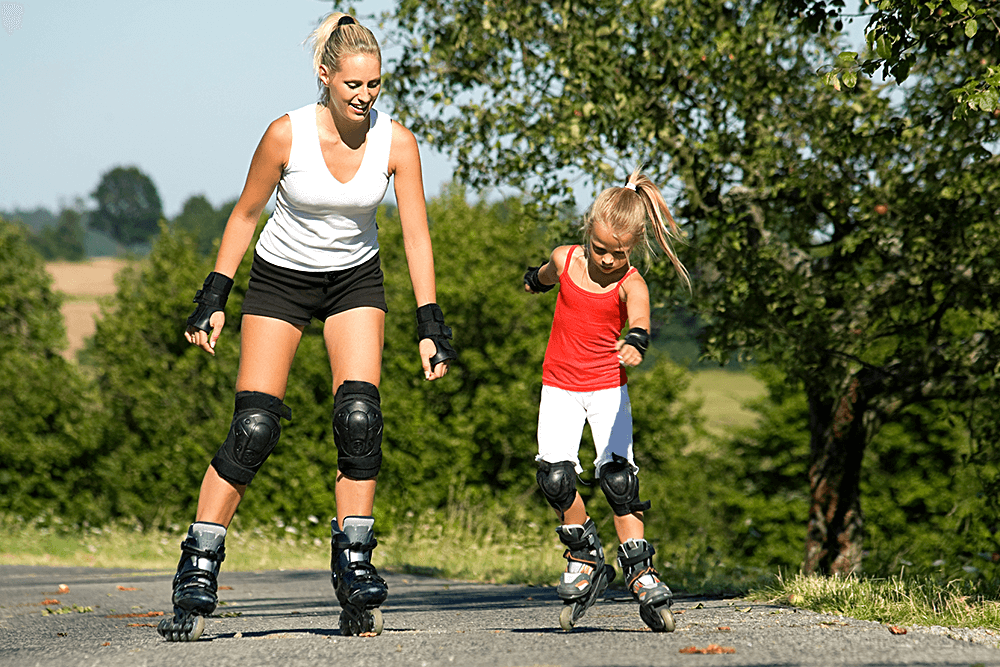 New York City is considered a skating Mecca and the skating centerpiece is Manhattan’s Central Park. Here they have an almost six-mile loop where all unauthorized motor vehicles have been banned at all times to promote safe jogging, cycling, and skating. The Parks crew keeps roads in relatively good condition and traffic patrols help keep the routes clear and safe.

Where can I rollerblade in Central Park?

There are several prime locations in Central Park for skaters, depending on the type of activity you are looking for.

Completing a full loop of Central Park is often called “doing a big loop.” The full circle starts at the southwest corner of the park located at Columbus Circle located at 59th Street and Broadway. It will take you along the lower loop, then passed the Boathouse, up Cedar Hill, and by the Metropolitan Museum of Art. Then you will have the Reservoir, a good straightaway to the North Meadow, and A. H. Green Hill to Harlem Meer before turning west. Here the loop hits the Great hill with a 90-foot climb in less than a half-mile before winding gradually south and passing by the Delacorte Theater and the American Museum of Natural History. Last, you traverse the flats alongside the Lake, go by Strawberry Fields, and arrive at the intersection to the lower loop. It is a good workout and the almost six mile route takes a skater in good shape about 30 to 40 minutes to complete.

For a medium-distance route, an alternative is “cutoff loop.” It is much the same as the big loop, but a short service road allows skaters to skip Lasker Hill and Great Hill for a more moderate path. The cutoff loop is approximately five miles long. 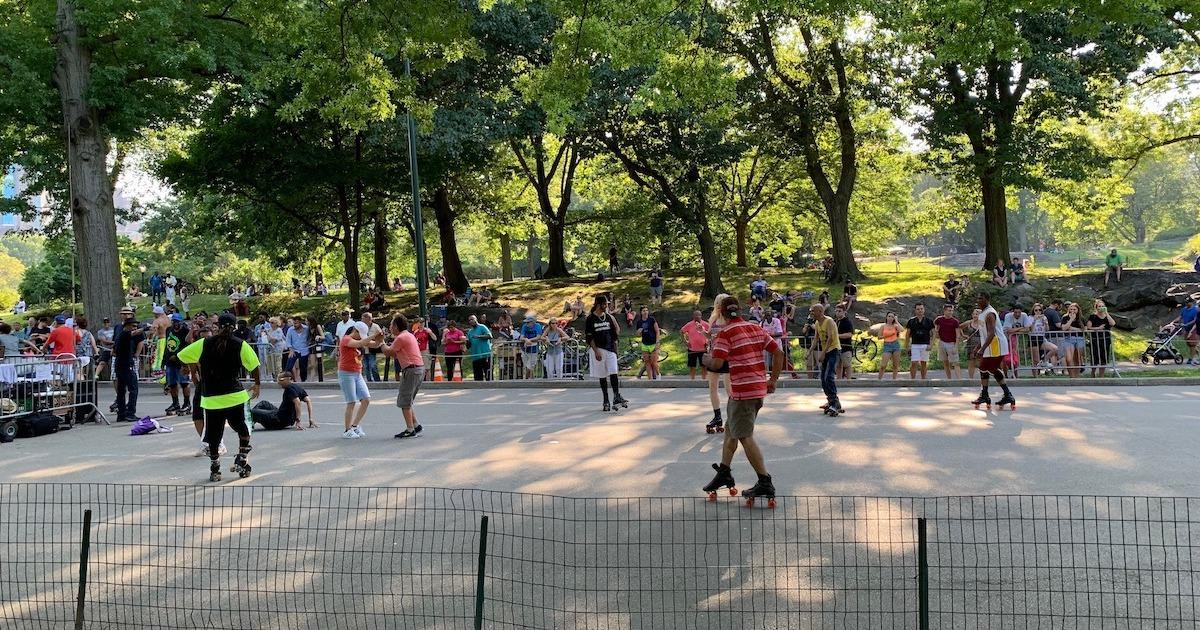 The lower loop starts at Columbus Circle and takes you around Heckscher playground and past Friedsam Carousel. Next, you pass the entrance to the Mall, follow a walkway to Bandshell, and pass the Summer Stage. Then you bear left and climb a short hill to Bandshell, pass Bethesda Terrace and Cherry Hill to arrie at the intersection of the west side loop where you bear left to pass Tavern on the Green and Sheep Meadow back to Columbus Circle. It is the most heavily trafficked area for park users of all types but features a tame collection of rolling hills for a short, casual route. The entire route is about 1.7 miles.

Speekskaters looking for hill training will work circuits of just the “upper loop.” This section features the Lasker downslope, a climb of the Great Hill, and then a cutoff back to the east side to do it over again. The route is only 1.4 miles but gives skaters one of the best climbs on the path.

A lot of inline speed skaters train on the loop and often stop for a breather in an area on the west loop located just north of Tavern on the Green and the West 67th Street entrance. This is a great place if you are looking for people to train with.

Officially known as Center Drive, but also called “Skaters’ Road” or “Dead Road” is where a lot of skating action can be found. It is located along the east side of Sheep Meadow from 72nd Street down to the carousel. The northern third of Center Drive is called “Skate Circle”. It is where scores of inline and quad skaters meet up. There is a large, open area for dance skaters and roller hockey as well. During the skating season, you may find small inline classes or private lessons throughout the week. 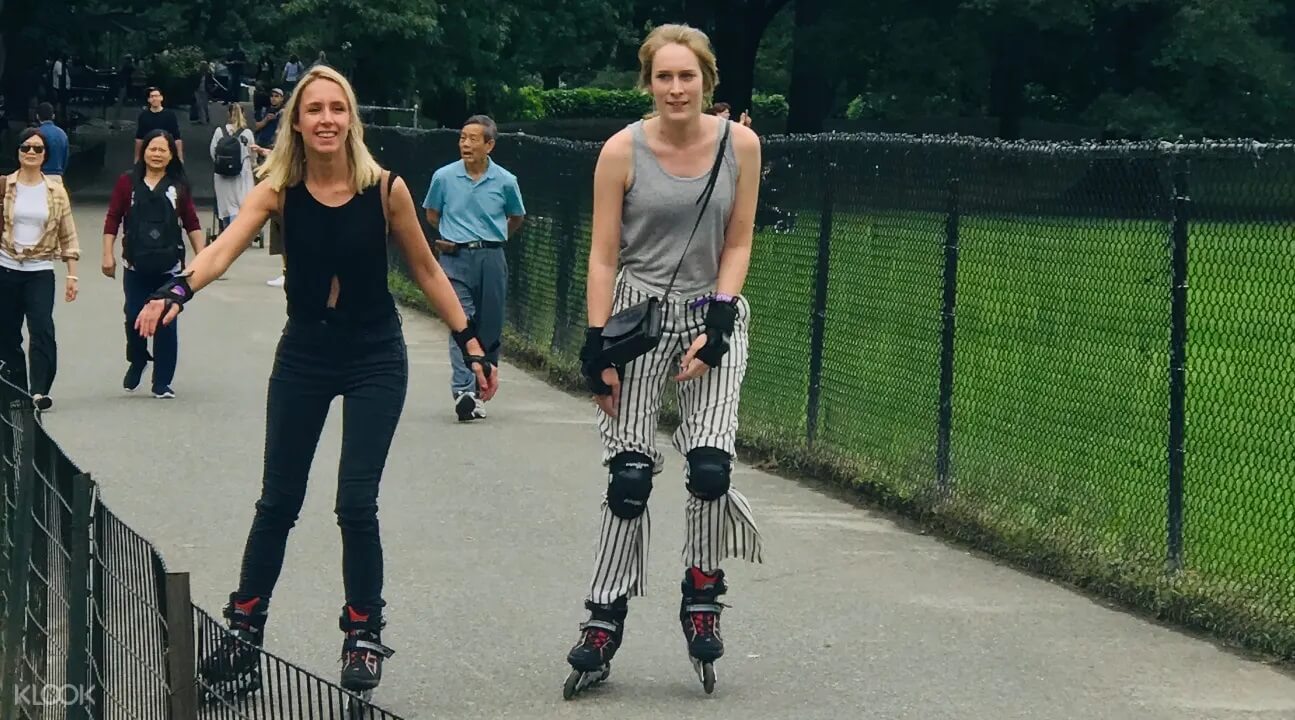 This area is just east and uphill from the “Skate Circle.” This area has a smoother surface than Center Drive, and feels more like an ice skating rink. This is where people line up a bunch of slalom cones for inline figure skating and maneuvers. Just note, police are known to clamp down on roller hockey in this area because it interferes too much with other park users and pedestrians.

What are the rules and regulations?

The loop is shared by pedestrians, joggers, cyclists, skaters, and horse-drawn carriages. With so much pedestrian traffic, safety is a top priority. Skaters must obey all traffic laws while skating the loop. There are also some basic safety tips to keep in mind. Traffic on the loop is one way, counter-clockwise. Large, white arrows marked every few hundred feet should make the direction clear. And if you must travel in the opposite direction, do so by getting to the side of the road and going slow. It is advised to wear reflectors and illumination while traveling the loop during evenings, mornings, and at night. It is very important to be mindful of other users and follow the rules on the loop